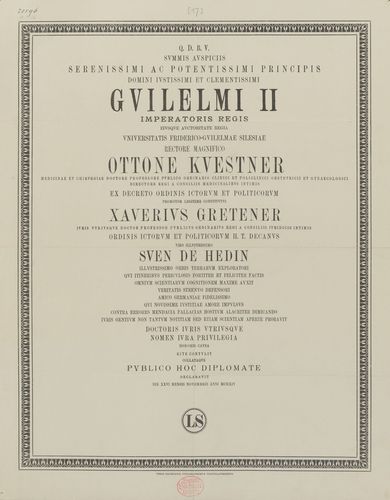 Sven Anders Hedin (1865-1952) was a Swedish geographer and writer. His voyages of discovery made him a world-famous expert on Asia. All his life he felt especially attracted to Germany, which he got to know during his studies in Berlin and Halle/S.

In the First World War he declared himself in his writings to be on the side of the German Reich, which damaged his academic reputation internationally. He described the war as a "Battle of the Teutons" and met and Kaiser Wilhelm II, Paul von Hindenburg and Erich Ludendorff frequently.

His romanticised reverence for German military leaders (which would later continue in relation to Adolf Hitler) earned him many awards and honorary doctorates from German universities, as can be seen here from the certificate of 1914 from Breslau University, which named him an honorary doctor of law.