Erich Kuttner: From There They Marched... 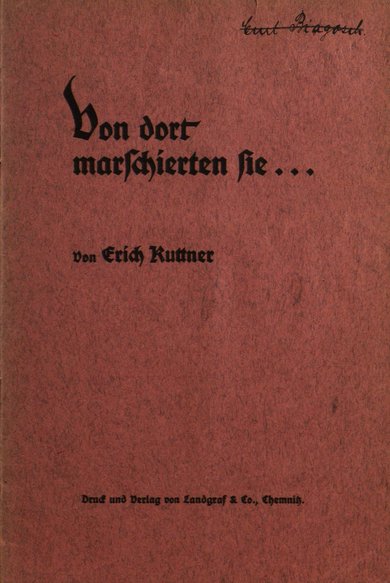 Erich Kut­tner: From There They Marched...

Dear old Xenophon! How often have I thought of you and your famous work recently: ‘The Return of the Ten Thousand’. […] There were chapters in which the saying was repeated: ‘Enteuthen eporeuthesan’ (‘From there they marched’). And then the information: 3 days’ march, 15 parasangs […] 5 days’ march, 20 parasangs, etc. I liked these chapters because the repeated sentence: ‘From there they marched…’ saved me from having to translate it. Incidentally, I couldn’t care less about the number of days’ marches or parasangs.

In 1915 the social democratic journalist and legal scientist Erich Kuttner, who was born in 1887, volunteered for military service and spent his first weeks as a soldier building defences at the Western Front.

To support the Eighth Army against Russian troops, Kuttner’s unit was sent to the Eastern Front in the summer of 1915. From there he wrote a sixteen-part series of reports for the Volksstimme, in which he wanted to write a history of the war from the perspective of a simple infantryman. These reports, written during the march of his unit through the battlegrounds, which totalled 500 km, were printed by the Chemnitz newspaper Volksstimme between 17 August 1915 and 5 February 1916 under the title “From There They Marched…” In the same year the reports, which had been received positively by the regiment commander and the divisional general, were published as brochures.

Although Kuttner’s reports, which were written for the patriotically-oriented social democratic Volksstimme, did not describe many of the conditions of which the soldiers complained – and indeed could not, due to censorship – they nevertheless give a useful insight into the everyday exertions of simple soldiers, which also occurred in this form on other fronts.

In 1942, immediately after the invasion of the Netherlands – where he had emigrated – by German troops, Erich Kuttner was imprisoned by the Gestapo and murdered on 6 October in Mauthausen Concentration Camp.