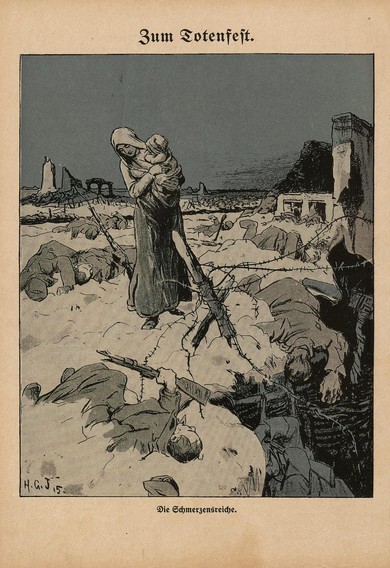 The battle roars, death reaps
The brave in droves;
But ever onwards in heroic steps
The German proletariat.

At the outbreak of the war the SPD was confronted with the question as to which stance the party should take towards the course of the Reich government. Ultimately, on 4 August, the Social Democratic parliamentary party voted unanimously in favour of war loans and thus joined the ranks of the advocates of the war, who believed in an enforced war of defence against attackers from the East and West. For the SPD, who argued mainly in terms of the fight against the most repressive regime in Europe, the Russian Tsarist Empire, this represented their entry into the alliance of the Burgfrieden, or general solidarity, and offered a concrete perspective with the hope of finally being released from the stigma of unpatriotic journeymen.

The Social Democratic satirical journal Der wahre Jacob supported and justified this position in its war issues. While domestic matters formed the focus of the journal in the years before the beginning of the war, the editors switched from the satirical criticism of capitalists, monarchists and the military from August 1914 and turned their attention to the opponents of the Central Powers. With regard to domestic matters, the journal focussed on the so-called war profiteers in the form of speculators and munitions manufacturers. Although no direct reference was made to the growing distress of the population, from 1915 the journal repeated carried illustrations expressing the desire for peace.

In the question of the progressive divisions within the SPD, which led in 1917 to the separation of the party’s internal opposition and the foundation of the USPD, the journal took the part of the majority social democrats. In the caricatures the representatives of the MSPD were shown as decent men with clear political ideas, while the members of the USPD were depicted as troublemakers.

The year 1918, in which a final attempt was made by the German military leadership to defeat the enemy at the Western Front with a large offensive, was dominated in the Wahre Jakob by exhortations in the caricatures to remain steadfast. Increasingly, the German army was shown behind a well-secured defensive wall, against which the Allied troops ran repeatedly, without success.

During the revolution from November 1918, the Der wahre Jacob held its MSPD-true line and supported the persistent governing policy of the MSPD, which now bore sole responsibility for government after the withdrawal of the USPD from the provisional Reich government, the Council of People’s Deputies. Arising from its much-criticised need for security, it sought close cooperation with the old elites from the worlds of business, administration and the military.