An expressionist at the front 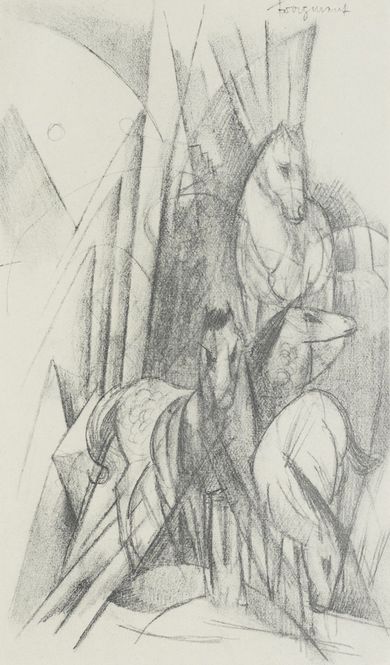 An expressionist at the front

For days I have seen nothing but the most horrifying things that the human brain can conceive.

Franz Marc, from a letter dated 2 March 1916 to his wife Marie Marc

Immediately after the outbreak of war in August 1914, Franz Marc signed up as a war volunteer. Like many other artists and intellectuals he expected that the war would have a cleansing and healing effect on a “sick Europe”.

Marc had made a name for himself as an expressionist painter, illustrator and graphic designer. His main focus was on representations of animals. Together with Wassily Kandinsky (1866-1944) he published the almanac Der Blaue Reiter and organised the art exhibition of the same name.

His initial enthusiasm for the war was soon replaced by deep shock, which was also reflected in his letters from the front.

There was little scope for artistic activity as a soldier, the only object that is preserved is his Sketchbook from the Front with small-scale pencil drawings.

In 1916 Marc was selected for the list of Germany’s most important artists and was to be released from war service. However, on his last day of duty, on 4 March 1916, he was fatally injured by shrapnel near Verdun.

Two commemorative exhibitions were held that same year in Munich and Berlin. His wife, Maria Marc (1876-1955), published his war letters and the sketchbook in 1920 with the publisher Paul Cassirer.