The War Collection of the Deutsche Bücherei 1914 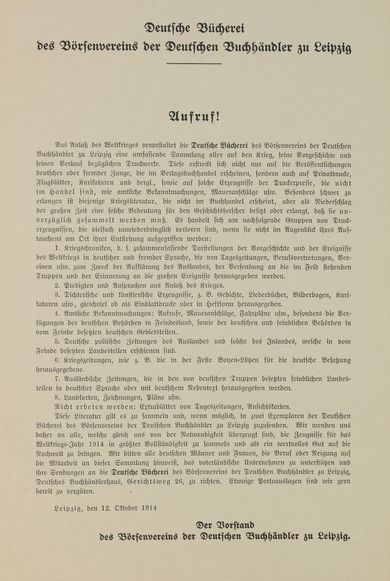 The War Col­lec­tion of the Deutsche Bücherei 1914

Compared to other large academic libraries in Germany, the Deutsche Bücherei, founded in 1912, was an innovation: the institution belonged to the German Publishers’ and Booksellers’ Association in Leipzig, whose administrative organs determined the matters of the library until 1940. Particularly influential were the members of the board of management and the advisory council, which monitored and managed the business transactions and library-related tasks of the facility.

The committees also decided in 1914 upon the suggestion by the first director of the Deutsche Bücherei, Gustav Wahl (1877–1947), who inspired the war collection. Wahl regarded it as a new task for the library “to provide later generations with as complete a picture as possible of the difficult time […] now being suffered by our German people” (Administrative report of the DB, 1914). However, when the managing board discussed Wahl’s suggestion on 26 September 1914, it was not the war that formed the main focus of the agenda, but instead the question of the new construction of a library, as the Deutsche Bücherei had been housed in the rooms of the Deutsches Buchhändlerhaus in Gerichtsweg from 1913 to 1916.

At the meeting of 26 September, Wahl highlighted the fact that the outbreak of the war had produced a “rich literature”, which the Deutsche Bücherei could not neglect to collect. In particular, printed material that was published outside of the publishing trade by public and private entities, some of which did not come under the library’s normal collections, should be snapped up “there and then”.

Expecting that the war would end quickly and victoriously for Germany, the participants on the board formulated the further course of action. With the help of the Publishers’ and Booksellers’ Association, all booksellers in every large city were to be requested to contribute to the collection from their catchment area by procuring two copies of publications outside of the book trade in the library’s name. The idea of collecting two copies of each item was based on the consideration of starting the collection in cooperation with the Royal Library in Berlin. It is no longer clear why this idea was later