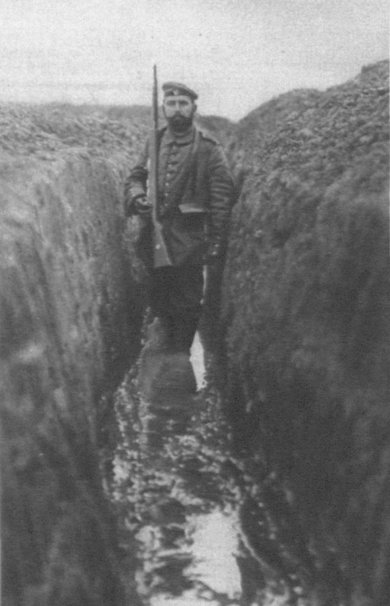 We are having difficult weeks here in Flanders. I am writing by candlelight in a tunnel, from which we have not emerged since the last detachment 14 days ago.  […] We have little to eat and ever greater losses. […] We are still doing our duty, but we no longer know why or for whom. […] Things will have to be different later, for what do we simple soldiers have from the war. […] Nevertheless, we commit ourselves on behalf of the Fatherland, because we do not want the horrific destruction that reigns here at the front to come to our homeland.

Karl Pöppel-Steffens, Undaunted. Life and Realisations of a German in the 20th century, 1917, published in 1981

The war of attrition began on the Western Front after the Battle of the Marne. In order to protect themselves from enemy fire, the soldiers dug ditches and caves in the ground. These trenches formed the backdrop of the duty at the front, which often involved boredom and apathy. The soldiers guarded, cooked and slept there. In their burrows, which were driven into the loamy walls of the trenches as housing, they wrote letter to their families. From here they heard the enemy in the night, improving his trenches, putting up barbed wire, or setting off on patrol.

An attack on enemy trenches was often prepared in advance by artillery fire. Light and heavy calibre guns hit the enemy with severe barrages. The intention was to destroy the trench systems, machine gun positions, fortifications and communications systems with a hail of grenades, as well as to demoralise the defending enemy. The living targets of these guns – some of which weighed two hundredweight – lay in dug-out burrows, trenches or shell holes and could do nothing but hope that they would not be hit. They must have had the impression that they were not being threatened and killed by the enemy, but rather by things, by shrapnel and toxic and explosive gases. The overriding feeling of these soldiers was that of being surrendered without protection and a complete powerlessness in the face of a weapon that was operated, but could not be controlled, by other humans.

After the artillery fire was over, the immediate danger began for the attacking infantry. Climbing out from the relative protection of the trenches, they found themselves in no man’s land, which had to be crossed in order to kill the remaining enemies in close combat with bayonets, rifles or daggers. During this assault, the machine gun was the most effective weapon of defence. Whereas a soldier could release around 15 shots per minute from his rifle, the machine gun scattered up to 600 bullets in that time. This allowed the defenders to hold large sections of no man’s land under fire and cause devastating losses to the attackers.

Confronted with such experiences, many soldiers felt the need to give it all some sense. Whereas at the beginning of the war idealistic interpretations of the events of the war could still be seen, claiming, for example, that the war was being fought for the future of German culture or a new society, during the later course of the war, many soldiers saw themselves increasingly as victims of a catastrophe to which they had been surrendered without any protection. Socialist soldiers regarded themselves as the victims of the capitalists and the military, for whose benefit they had been sent to their deaths – even though the socialist interpretation of the war had initially considered it to be a necessary evil that would eventually bring about the much yearned-for revolution. In the religious interpretation, soldiers saw themselves as the victims of God, who looked on without taking action while people died. This concept of victimhood replaced the original idea, according to which the war would lead to a reformation of materialistic society. Among farmers a diffuse and varied form of victimisation dominated, which was also shaped by a very resigned attitude.

Thus, in the national interpretation, the idea which dominated at the beginning of the war was that the soldier was sacrificing himself for the Fatherland, in other words exercised an active, voluntary role. During the course of the battles, however, this perspective switched completely and was replaced by the idea that one was being sacrificed on behalf of other interests.