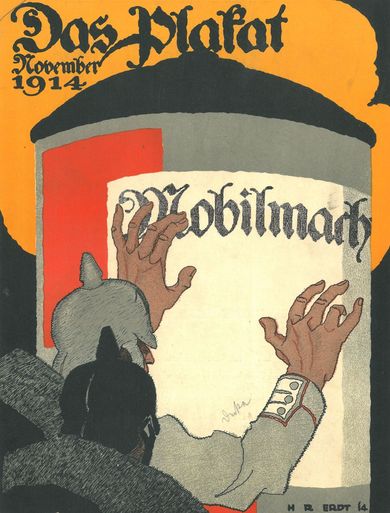 By the time of the First World War posters were already an established means of communication, some of which were designed by renowned poster artists. During the war posters were used for announcements by the German military authorities, for event announcements, and as advertisements for war bonds, among other things, and competitions were often held for the best design. The first written posters of the war were the announcement of the order to mobilise, the message that war had been declared, and the conscription of the Landsturm.

Due to their more penetrative effect, picture posters were used more often from 1916, to advertise for war bonds and various different raw material collections. Frequently used motifs included the fighter as a contemporary soldier in uniform and steel helmet, army war equipment and submarines. Towards the end of the war the posters increasingly advocated perseverance and stoicism.

By 1921 the War Collection of the Deutsche Bücherei held around 15,000 posters. They were categorised into official and non-official posters (from the occupied territories, from Germany, from Switzerland and Luxemburg), into war bond posters and programmes (theatre and concert posters). Most of the written posters are still held by the library. However the picture posters are no longer in the collection, with a few exceptions.