Get ready for attending the celebrations of 1 May
German National Library, Signature: Nov.7.7

A general holiday with the character of a world holiday dedicated to the ideas of world peace, the League of Nations and the international protection of workers' rights is to be introduced. Its final nature will be decided once peace has been concluded and the constitution adopted. This year it will be celebrated on 1 May.

Back in 1889 the International Workers' Congress of Paris had taken the decision to make May 1 an international labour day. The main goal was the implementation of the eight-hour day; this was to be promoted with rallies "in all countries". However, 1 May was and remained a normal working day in Germany. The May celebrations had to be held either in the evening or the next Sunday. A public holiday did not become a realistic prospect until after the Revolution of 1918. 1 May 1919 was eventually declared a holiday in a Reich law, but only for that year. Later attempts failed because of the resistance of the bourgeois and conservative parties. The issue was therefore resolved at the Länder level – until 1933 when the National Socialists declared May 1 the "Day of National [no longer international!] Labour".

The internal fragmentation of the workers' movement in the Weimar Republic was already apparent in the calls for the May Day celebrations in 1919. The Social Democratic newspaper Republik commented ruefully: "Nothing would have been more uplifting for the German workforce than if this year's May Day had been organised so that the adherents of all socialist movements could demonstrate peacefully side-by-side." Instead, the SPD, USPD and KPD each held their own separate parades and events. 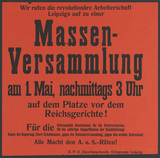