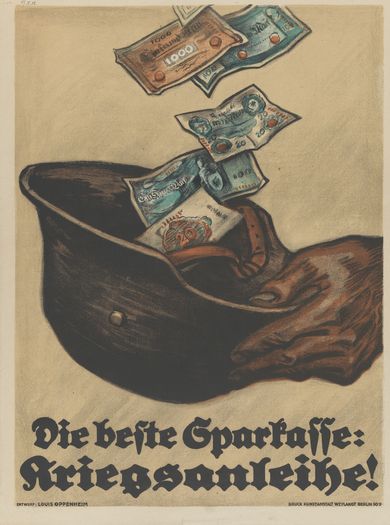 And when a large Zeppelin flies above London and drops a heavy, fat bomb on the Bank of England […] or when a submarine sends a grenade into the black belly of an enemy ammunition steamship, […] then you can beat your fist on the table and say: I helped to do that, I helped to pay for bombs and grenades.

Heinrich Baumann, Do you want to subscribe to war bonds? Flyer of the village church, No 6, 1916

The German Reich financed most of its war costs by the nine war bonds that were issued between 1915 and 1918. In all, the bonds yielded a volume of 98 billion marks. The interest rate was quite high, at five percent, and was supposed to be repaid, like the original sum, by means of reparations from the defeated enemies.

Official propaganda and censorship accompanied the semi-annual issuing of war bonds. This was intended to suppress criticism of this method of financing the war and bely any doubts about the security of the papers. So-called instructed representatives such as teachers, clergy, parish chairmen and civil servants of the savings bank, advocated subscribing to the bonds in lectures and personal meetings, so that the willingness to donate became the yardstick of German society’s internal solidarity and will to win.

In the autumn of 1916, however, after the issue of the fifth war bond, the number of subscribers declined from the previous 5.2 million to 3.8 million. In particular savers with a low income were much more reserved this time. The relatively low participation was attributed to the impact of enemy propaganda and rumours that were circulating about the security of the bonds.

Therefore the sixth war bonds were introduced in the spring of 1917 with a propagandistic effort that had never been seen before. Newspaper articles, slide shows and factual films first tried to convince the population, prior to release, of the solidity of German financial policy. Upon the release of the bonds, the advertising work that had been used before once again sprang into action: via press work and representatives, the people’s trust in the war bonds was to be strengthened once more.

What was new this time, however, was the massive deployment of picture posters. More than 1.4 million posters in different formats were placed on advertising pillars, in trams, buses, subways, authorities, waiting rooms and ticket offices, all advertising the war bonds.

The campaign was a huge success. More than seven million people subscribed to the war bond, amounting to more than 13 billion Reich marks. The poster thus proved to be a means for motivating Germans to contribute further financial and moral support to the war effort. At the same time this campaign marked the departure from traditionalist propaganda, which relied on the conveyance of facts by intermediaries, towards modern forms of influence by means of modern, visual media such as posters and films. 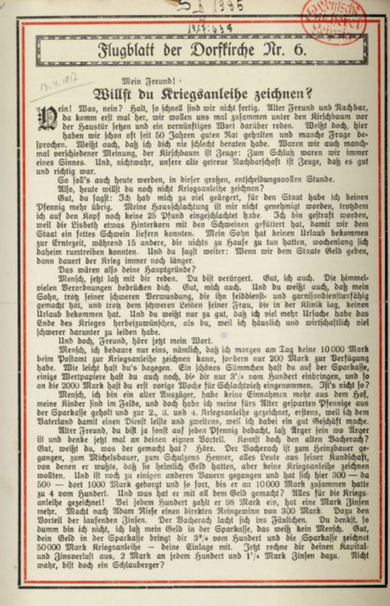 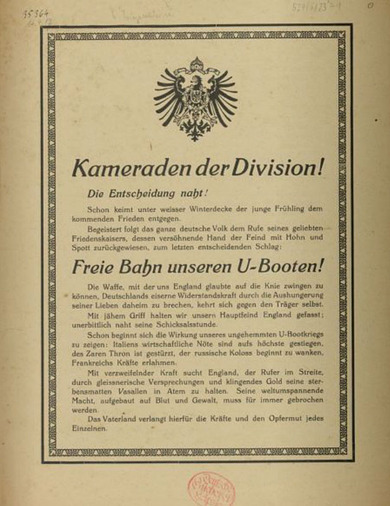