The Deutsche Bücherei stages an exhibition 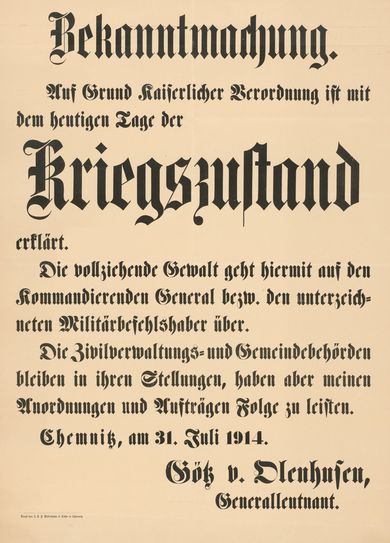 Notification by the City of Chemnitz about the state of war, poster, 1914
German National Library, First World War Collection

The Deutsche Bücherei stages an ex­hi­bi­tion

The discussion, which began immediately after the beginning of the war, as to which tasks should be assumed by archives, libraries, museums and exhibitions in German society was directed primarily at the problem of finding an appropriate kind of presentation for this historic event.

It was a question that was also posed by the former Deutsche Bücherei, or German Library. Obviously inspired by the activities of the German Museum of Books and Writing in Leipzig, it also wanted to present the world war on the basis of its inventory, in order to promote understanding for the institution. The laying of the final keystone of the new library building provided the opportunity for the opening of the war exhibition on 30th April 1915.

Embedded in the programme of events of the Börsenverein, the library displayed the first “notable” exhibits from its war collection in the Deutsches Buchhändlerhaus from 30th April until 15th May 1915. Source material of the highest order (Otto Lerche, Die Kriegssammlung der Deutschen Bücherei. Kriegsausstellung, 1915), German, Austrian and French proclamations, and military notifications posted by the Germans or Russians in East Prussia and Belgium were shown in 36 display cases. The greatest interest was generated by the flyers dropped from airplanes and the field newspapers printed by German troops.

It remains unknown what resonance the first war exhibition by the Deutsche Bücherei found among the people of Leipzig. An amicable comment in the press at the time stated: "All in all an instructive overview of the impact of the war on German intellectual life […]."(Berliner Tageblatt from 07.05.1915)