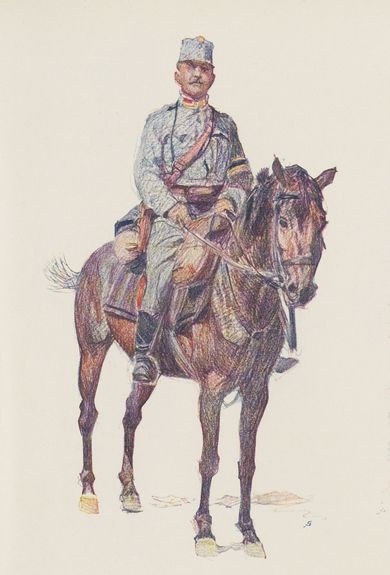 The third exhibition by the Deutsche Bücherei was obviously inspired indirectly by the activities of the German Museum of Books and Writing, which had become involved in 1916 in the state-organised Deutsche Kriegsausstellungen - German War Exhibitions in Schwerin, Rostock, Bremen, Dresden and other cities, and had received much gratitude and appreciation from the public.

In order to attain a similar resonance with its own exhibition, the focus of the War Pictures Exhibition of May 1917 was in particular illustrated field gazettes, modern war graphics and posters, as well as “enemy inflammatory images”. In order to pillory in particular the “slanderous […] war graphics of the enemy states” (Johannes Thummer, War Pictures Exhibition, 1917), lithographs by the Dutch illustrator Louis Raemaekers (1869–1956) were shown, which excited the special interest of the visitors.

A further group was formed by graphics portfolios issued by publishers, in which artists such as Max Liebermann, Lovis Corinth, Max Slevogt, Max Unhold and others were represented with drawings and pictures.

As well as art and illustrated magazines, caricatures by Olaf Gulbransson, Thomas Theodor Heine and Heinrich Zille from Simplizissimus, Kladderatsch and other satirical publications were shown, which were joined by illustrated books and broadsheets.