The war and art exhibitions shown in Germany in 1914 and 1915 by museums and other institutions gained competition from 1916 from state-organised touring exhibitions initiated by the Prussian War Ministry and the Central Committee of the German Red Cross. The objective of the German War Exhibitions was to present to the population the “tangible successes” of German troops. Professionally organised and equipped, the touring exhibitions took on a pioneering role in the area of war propaganda from 1916, in an attempt to counter the impending war weariness in society. 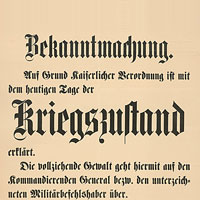