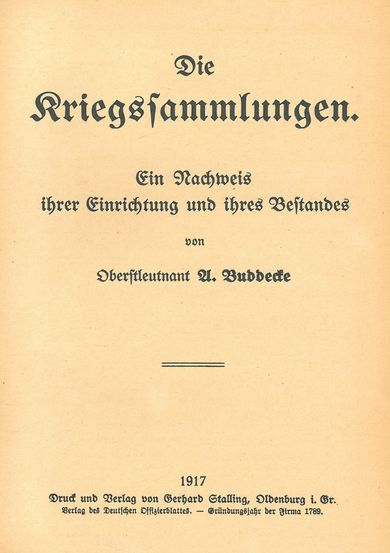 Collections were started as early as in the first weeks of the war, preserving contemporary documents with state or private support, with the intention of passing these on to later generations. Following their own individual objectives, archives, authorities, libraries, museums, private individuals and associations competed with each other. They either collected everything they could get their hands on or restricted themselves to special areas, either factually or geographically.

Among the numerous public institutions, the German libraries deserve special mention, having commenced war collections as early as 1914: in Strasburg at the Imperial University and State Library (4 August), at the Royal Library of Berlin (mid-August), in the Deutsche Bücherei of the German Publishers’ and Booksellers’ Association in Leipzig (early October), in Munich’s Royal Court and State Library (25 November) and elsewhere.

They often competed with other collections within the same city. In Leipzig, for example, there was fierce competition between the Deutsche Bücherei, the Chamber of Commerce library, the German Book Trade Museum, the Wartime Economy Museum, the local history museum, the Association of the German Typographical Society, the state and university library and a range of private collectors.

Leipzig was certainly no special case. The situation was similar in Berlin, Hamburg, Freiburg and other cities. In 1917 there were more than 200 collections in Germany. By 1919 around 350 war collections were known of. It is no longer possible to determine an exact figure including all collections initiated by associations and private collectors, as these were frequently abandoned after 1918 or sold during the period of inflation.