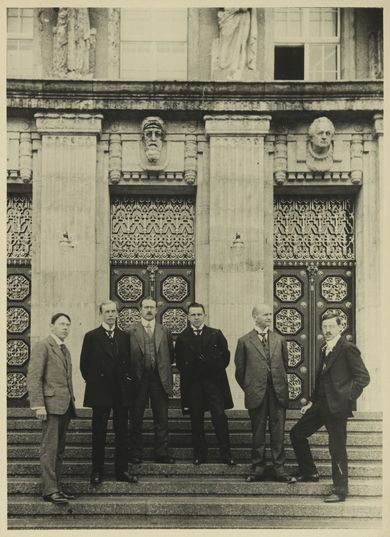 The first contemporary documents were being received into the war collection on 5 October 1914. By the end of the year there were around 1,800, and in March 1915 already 4,000 documents, above all announcements by the military and civil authorities of the German Reich.

Poorly staffed, Gustav Wahl (1877-1947) managed to increase personnel for the collection only in 1915, after long discussions with the management board. Along with Gustav Wolfhagen, Franz Grein, Friedrich Wilhelm Seele and Karl Erich Kannegießer were employed.

By the end of 1915 the overall inventory comprised ca. 16,000 items. Following the inauguration of the new building in September 1916, the war collection moved into rooms on the first floor. Total acquisitions for 1914/16 comprised around 31,000 printed items. After the departure of Wolfhagen (1915), Grein, Kannegießer and Seele (1916), Otto Lerche ran the collection from October 1916 until March 1917. As well as Lerche, the secretary Edith Jansen and the office assistant Gertrud Erika Carlsohn also worked in the war collection.

Under the new director Georg Minde-Pouet (1871-1950), who took office in May 1917, the management board then decided not to continue with the collection in its present form. A number of factors were responsible for this decision, not least the question of personnel, which was well below that of other war collections.

From March 1917 the collection was led by Johannes Thummerer, whose work was continued in 1918 by Edith Jansen, under the direction of Minde-Pouet. Whereas acquisitions in 1917 amounted to around 15,000 items, this declined in 1918 to around 6,500 pieces. The low point of the collection came in March 1919, when Jansen left. Minde-Pouet took the occasion of the departure to dissolve the collection and to cancel the entry register, which still listed around 1,400 documents for the period from January to March. From that point on, the War Department took on the character of a winding-down position, with its work carried out by other departments in the building and by Albert Paust. The war collection was finally dissolved in 1922.