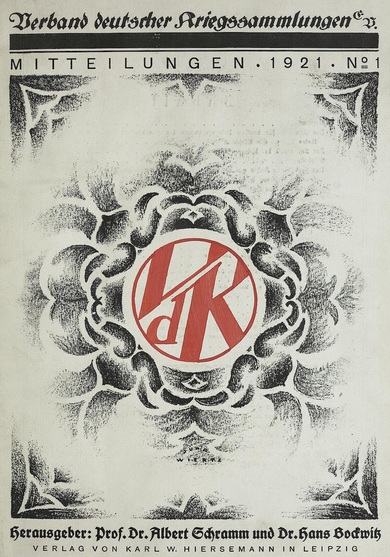 The cooperation between the war collections and the military authorities became increasingly difficult in 1915/16, after the edict issued by the Prussian War Ministry on 20 July 1916, forbidding the authorities from passing on any war materials to civilian institutions.

Because all war-related written materials now had to be submitted to the newly-created Sichtungsstelle für Kriegsbeute und Bibliothekswesen in the Army General Staff, the collections were consoled by the prospect of gaining acquisitions at the end of the war. A consequence of the edict was that many libraries intensified their trading transactions and joined the Verband deutscher Kriegssammlungen (VdKS) in 1918.

To the very end, the members of the VdKS, which was founded in Berlin on 12 May 1918, continued to place their hopes in the war-related written material that had been deposited in Berlin and promised to them in peacetime. These hopes of receiving printed material from military sources were finally dashed in 1920, as the latter were instructed to send their inventory to the Reich Archive in Potsdam or the State Library in Berlin.

The association disbanded rapidly in 1921. When the association’s journal also ceased publication, the unifying band that once held the German war collections together, also tore.