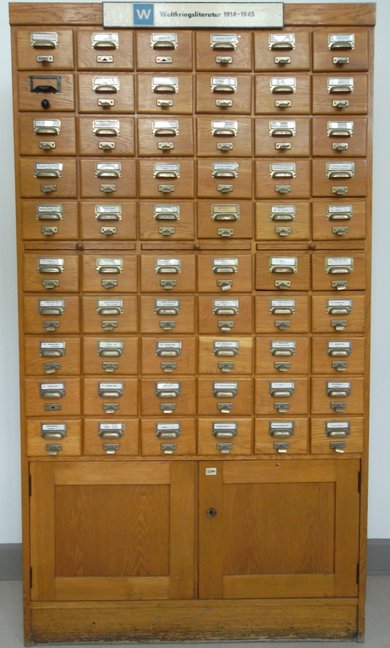 The register, conceived as a separate catalogue, was intended to record the entire war literature systematically. The preliminary work for such a system was carried out in 1920, whereby an initial structure originally foresaw 39 main and around 1,500 sub-categories.

As a result of the reduction in staff, the catalogue work ceased for a few years, before being continued in the 1930s. In 1936 the catalogue took its present form in 20 groups, along with further subdivisions, following the system of the Berlin State Library.

The catalogue comprises 55 boxes, with an estimated 40,000+ index cards, and even more titles. As well as other materials of the War Collection, the card catalogue also contains details on publications about the 1914/18 World War, which originally were not part of the collection.

Not recorded is the special material that was discarded in the 1920s, such as photographs, token money, postcards, while some posters and flyers were preserved. After 1945 the catalogue was continued only sporadically until the 1950s, and should therefore be seen as an incomplete source of information on the subject of the 1914/18 World War.