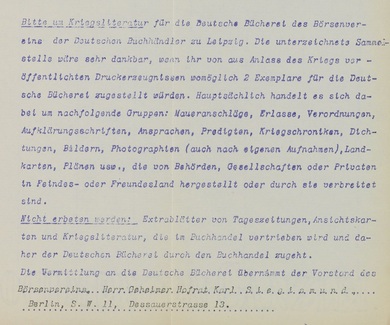 In 1914 alone the ongoing correspondence relating to the new collection ran to 290 letters and 918 cover letters, 832 requests to find field post addresses and around 2000 messages to the press. In 1915 letters were written to around 220 military and civil authorities, 537 libraries, archives, museums and 480 bookshops, newspapers, associations and private individuals.

Further promotional campaigns in 1915/16 included student fraternities in Germany and Austria, local councils and churches. In hindsight it can be said that the promotional activity addressed all relevant circles in Germany and in German-speaking territories, in order to draw the attention of the public to the – at that stage still relatively unknown – institution of the German Publishers’ and Booksellers’ Association.

The war collection in particular created the opportunity for the Deutsche Bücherei to make its mark as the newcomer among the German libraries. There is also evidence from abroad of the great effort put into requesting items for the collection. Like all German cultural institutions, the Deutsche Bücherei also saw its war collecting as a cultural battle. In its spontaneous and unsystematic piles of inventory, it was no different to any other institution. 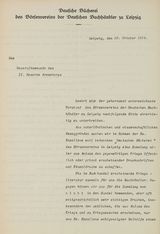