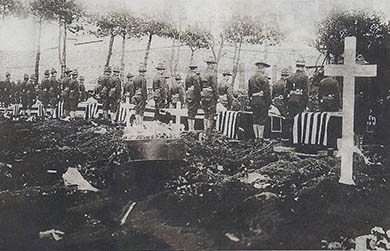 At the end of the last year of the war, I again spent the Christmas holidays with my grandparents in Bubsheim. That was also when the Spanish flu swept through Germany. Most of the inhabitants of the small village lay in bed with high fever, quite a few of them died; my grandparents also fell victim to the epidemic. Children called in vain for the priest, because they didn’t want to die without the sacraments. Physicians could not be summoned because there was no telephone; they would have been powerless to help in any case.

The Spanish flu is considered by some to be a forgotten pandemic, although there has been a significant increase in interest among historians in recent years. Three successive waves ravaged the world between 1918 and 1920. People aged between 20 and 40 were particularly badly affected. The number of deaths was estimated at 20 to 50 million; some even believe that up to 100 million people died. With hardly any press coverage and no statistics available for many regions, it is difficult to determine the exact scale of the tragedy. One thing is certain: the Spanish flu did not come from Spain. It presumably came to Europe with transports of troops from the USA. The first cases in France were reported in mid-April 1918. Physicians were baffled: viruses were not found to cause disease until 1933. In order to avoid alarming the population still further, there were hardly any news about it in the warring nations. Spain, however, was neutral. Uncensored newspaper reports gave rise to the impression that the pandemic had begun there.