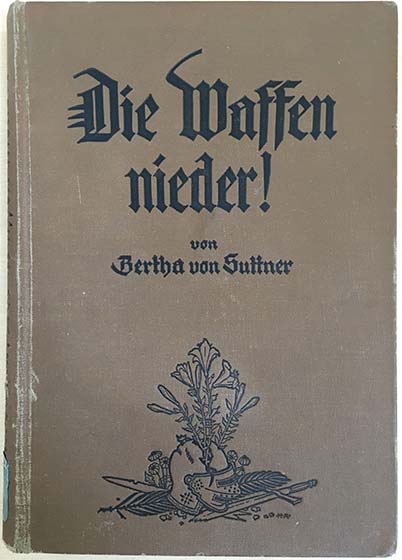 “The next war, about which people talk so glibly and so indifferently, will not be a gain for one side and loss for the other, but ruin for all.”

Nowadays, Erich Maria Remarque’s novel Im Westen nichts Neues (All Quiet on the Western Front) is seen as the most important anti-war novel ever written in the German language. However, there was a German-language bestseller about the horrors of war long before World War I broke out. It was written by Austrian pacifist Bertha von Suttner, co-founder of the Deutsche Friedensgesellschaft (German Peace Society). Die Waffen nieder! (Lay down your arms!) was first published in 1889 and is a fictional biography of a woman who is twice widowed by war and accordingly becomes an ardent pacifist. The author hoped that this would appeal to women, whom she believed to be more committed to peacekeeping than men. Several leading figures in the women’s suffrage movement, including Helene Stöcker, Anita Augspurg and Lida Gustava Heymann, did in fact later become active in the peace movement. However, they remained in the minority.

The novel also became well-known outside bourgeois circles. Social democrat Karl Liebknecht also printed it as a serial in the journal Vorwärts (Forwards), of which he was the editor. However, there was never any real cooperation between the workers’ and bourgeois peace movements.

When war broke out, the peace movement became subject to massive repression. Its members were kept under surveillance, its publications were censored, and participation in international congresses became almost impossible because of the restrictions on leaving the country. Some of the figureheads of the German pacifist movement emigrated.

Bertha von Suttner, who was awarded the Nobel Peace Prize in 1905, did not live to see this. She died on 21 June 1914. All the same, she had foreseen the outbreak of a world war. In his memoirs, writer Stefan Zweig recalled a meeting in 1913: “She came to me in great agitation. ‘People don’t understand what’s happening,’ she cried in the middle of the street, in a loud voice quite unlike her usual quiet, graciously serene tones... ‘Things are worse than ever, the machine is already rolling.’ Already uneasy myself, I had great difficulty calming her.” (Stefan Zweig: Die Welt von gestern (The World of Yesterday))