Spoken and written accounts of the Revolution

Exhibition in the Deutsche Bücherei 1919 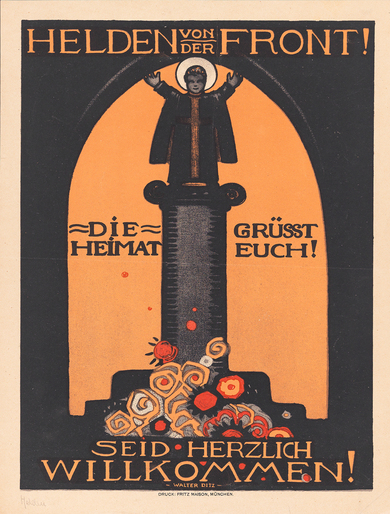 Exhibition in the Deutsche Bücherei 1919

The Deutsche Bücherei has now also attempted to collect the printed matter, the literary, typographical expression of the Revolution...Carefully arranged and logically presented, the course of the Revolution unfolds based on the most ephemeral printing products of the day. What is interesting and astonishing is that a line of development actually emerges.

In spring 1919 the Deutsche Bücherei staged an exhibition dedicated to revolutionary printed matter which, according to its own account, attracted large numbers of visitors. To one side of today's loans desk the visitors saw, on their way to the reading room, the documents of the workers' and soldiers' councils which had seized political control in winter 1918/19 in many towns and cities. They also saw party leaflets, notices, official forms and appeals to prisoners of war. Two cabinets and display cases alone were devoted to bureaucratic documents from this period of upheaval. On the wall there were e.g. special editions of the newspapers on the outbreak of the Revolution, the Berlin Spartacist uprising and the Leipzig general strike in February-March 1919. A great deal of space was also devoted to propaganda aimed at recruiting women into politics and to the many political newspapers. Visitors could find books on specific contemporary issues such as the national boundary line, the new status quo or the relationship between the state and the education system. The exhibition of media works collected from the outbreak of the Revolution contributed to the ongoing discussion regarding the reshaping of society.