Revolution collection in the Deutsche Bücherei, 1918 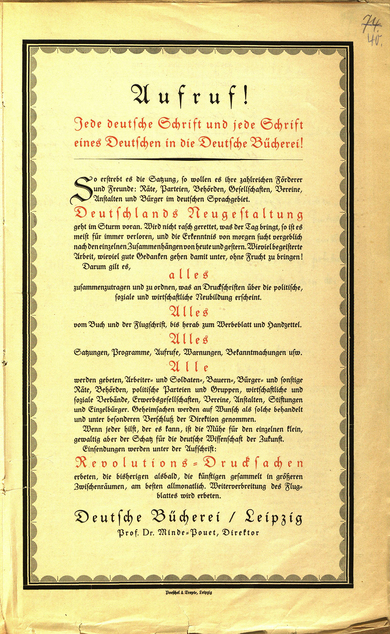 Rev­o­lu­tion col­lec­tion in the Deutsche Bücherei, 1918

The German Revolution was fought less with hand grenades, muskets and machine guns than with a vast amount of printed matter […]. The Revolution became a battle of the minds and essentially took on a paper-based character.

Despite the general crisis, the Deutsche Bücherei began to collect revolutionary printed matter immediately after the outbreak of the November Revolution. Similar to the World War collection, the writings which sprang from the Revolution and the reshaping of the political landscape were regarded as indispensable material for future historical research. Georg Schwidetzky (1875–1948) was tasked with calling for submissions and drew up procedural guidelines and sent letters to the councils. A further call was sent out in 1919 in Germany and Austria to workers', soldiers', citizens', farmers' and people's councils , political parties, associations, the Reichswehr (armed forces of the Weimar Republic), individuals and private collectors. The collection was discontinued in late 1919 due to staffing shortages. Further work, especially interlibrary loans, was only conducted sporadically. By 1920 the collection included 2,532 posters, 6,855 leaflets and 732 newspapers.