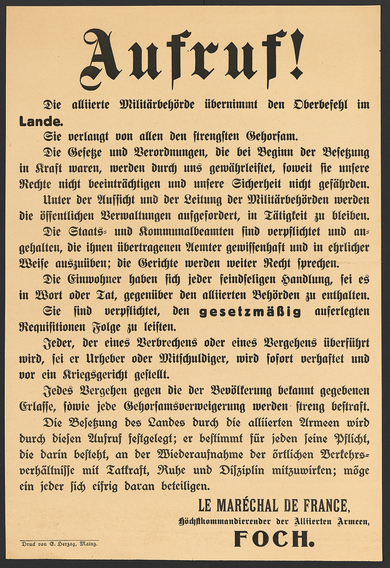 The cease-fire agreement of 11 November 1918 resulted in the stationing of American, French, Belgian and British troops on the left bank of the Rhine as well as on some right-bank bridgeheads. It also envisaged a demilitarised zone on the border with France. The Treaty of Versailles then set the occupation of the Rhineland at fifteen years. (Eventually it only lasted until 1930.) The aims of the occupation were to protect France from future attack and to secure payment of the German reparations.

In contrast to the other Allies, France also deployed soldiers from its colonies in the Rhineland. These colonial troops from north and west Africa as well as Madagascar and Indochina aroused particular public outrage. Although they constituted only about 30% of the French occupation forces and "did not commit above-average numbers of violent crimes" (Christian Koller, 2001, "Von Wilden aller Rassen niedergemetzelt", 2001), a broad campaign based on racist arguments was directed against the so-called "Black Shame" on the Rhine.

Numerous pamphlets, newspaper articles, even novels and plays appeared on the subject between 1920 and 1923. Some of these went through several editions. Meetings were held and talks given in many German cities. The National Assembly also voiced its protest.

One of these apocryphal horror stories formed part of Klaus Mann's childhood memories: "There was a Moroccan who was said to have raped not only dozens of virgins and boys, but also - the pinnacle of depravity! - a fine-looking mare, the only possession of an honest peasant family. This absurd fiction haunted me for years ... " (Klaus Mann, Wendepunkt, 1952)