Airborne Flyer Propaganda at the Front 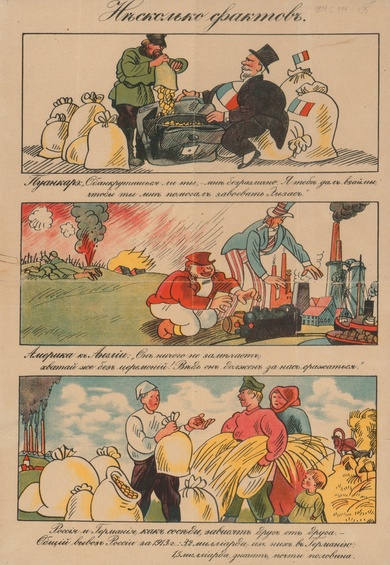 It is not enough to dismiss enemy propaganda as a monstrosity of national degeneration […] When the first evidence of the hatefulness of enemy propaganda was presented it was the result of advice from the Foreign Office to engage a psychiatrist as an expert, who could prove the abnormal mental state of the enemy from the his propaganda.

At the beginning of the war, propaganda had very little reach or effectiveness at the front. The flyers were packed in tins, which were weighed down with stones and dropped into enemy trenches. In individual cases, the flyers were also projected with bow and arrow or attached to the wire enclosures of the opponent. In addition, there was much experimentation with artillery fire. For example, the shrapnel was removed from the grenades and replaced by flyers. Then the field artillery fired the grenades towards enemy lines, where an explosion opened the grenade casing, revealing the paper content. Flyers sent by these means can still be recognised today by the typical compression of the paper, caused by the recoil when fired.

The most common means of transport at first, however, was the airplane. The material was taken along as additional cargo on reconnaissance missions and drooped by a second member of the crew. In 1917, 97 percent of all British flyers were distributed by these means. However, in reference to the Hague Convention, the Foreign Office announced in May 1917 that in future all enemy pilots who had dropped flyers and been captured, would now be punished according to martial law.

To avoid exposing its flying personnel to any further danger, the British decided to cease distribution with airplanes and to look for alternatives, while the French continued to use airplanes until the end of the war. The most suitable means of transport turned out to be the paper balloon. This was 2.40 metres high and had a diameter of 6 metres. At a weight of under 500 grams it could transport up to two kilograms of paper.

A fuse, upon which the packages with the flyers hung, burned down around 2.5 centimetres in five minutes. Thus, with the length of the igniter cord the sender could determine roughly how large the territory to be worked should be. The holding wire was threaded through stamped holes in the paper, so that this method of distribution can also be reconstructed today.

The balloons reached a maximum height of 1,000 metres and covered distances of between 20 and 100 kilometres, before gradually sinking to the ground due to a loss of gas. They were intended to transport the majority of the “barrage of printed paper” (Michael Tobegen, Fliegerabwürfe in der Deutschen Nationalbibliothek, 2014) behind enemy lines in the last years of the war.